If you’ve ever watched a TV paranormal investigator trying to contact the dead, you may have heard them say something along the lines of “We do not invite negative entities here” or “We only wish to speak with positive entities.”

This pretty strongly indicates that they believe that there are bad spirits out there, just like there are not-so-good people in this world.

Negative hauntings aren’t totally unheard of. So, when we previously wrote about Spirit Boxes here on Soulvibe, we had some requests from readers to explain a little more about the darker side of talking with spirits.

So, how can you avoid inviting in negative energy (especially if you’re interested in this stuff), and what can you do if you think bad spirits are in your home?

I think we’ve all heard of some terrifying ghost stories. Perhaps you think you’ve survived some malicious spirits yourself. Here are a few personal and famous accounts of some pretty terrifying spiritual encounters:

Out with the Bad, In with the Good

There is no shortage of people who believe there are ghosts in their new home. Other times, people think they have accidentally (or intentionally) invited bad things inside. What should you avoid doing if you don’t want to attract negative spirits or energies?

Not surprisingly, some say that performing black magic or using a Ouija board (even if it’s supposed to be a joke) can invite entities into your home — particularly the bad kind. Now, of course, Ouija is a game and it is rather controversial as to whether it even works or not. We’re not going to tell you to not play with it if you want, but if stories of malicious spirits are true — you should likely use caution to not invite anything in or attempt to communicate with something that seems creepy.

After all, if you watched the video above with journalists getting scratched and pinched when they thought they were going to be doing a fun puff piece on a local PA haunting, there seemed to be a belief that spirits attacked a reporter physically.

If you tend towards intense emotions or you’re super stressed out, some believe you might be at higher risk of pulling in malicious entities. Make sure you’re getting the help you need to work through your emotions so that you can promote positive vibes, whether that means having a friend or confidante, practicing meditation, or talking with your doctor about mental health. Poltergeists are often not truly ghosts or spirits, but if there is such a thing, they are said to be manifestations of negative energy, created by someone alive.

Also, it bears mentioning — don’t murder anyone. That’s definitely not cool. It’s a sure way to bring in malicious, angry spirits — not to mention the orange jumpsuit that will become your entire wardrobe. Let’s face it, murder is just never a good thing, Friends — even if your don’t believe in this stuff.

Okay, in all seriousness, if you’re looking at buying a new house and you’re a believer who is looking to avoid hauntings, check out its history to make sure there weren’t any violent deaths in the home. These things aren’t always disclosed up front unless you ask.

Already think you’re haunted? Some ways to potentially cleanse the environment is to use sea salt water when you mop or spritz it with a spray bottle. The ionization of sea water, especially as it evaporates, is said to lift mood and your positive energy alone can change the tenor of your home.

Of course, a clean home is a positive home. When you can, make time to keep your house free of clutter and wash your clothes. Light-hearted and energetic music can also be a good way to bring in positive vibes. If you’re feeling overwhelmed by negativity, open windows to let the negative energy out and invite positive energy in. You can also burn candles or sage, said to symbolically attract positive energy.

No matter what you believe, there are definitely people who have some pretty convincing stories of negative entities out there. In the spirit, it may be that malicious energies seem to be attracted to negativity, whether that’s dark magic or dirty socks. Do your best to keep your home happy and your mindset positive and you’re less likely to feel haunted. If you think there’s some darkness lurking in your home, start with taking care of you and your vibe first.

If you are convinced that your home is haunted and do contact a professional for help, please be wary first and foremost of self-professed mediums attached to a very large price tag. Start with your local or state paranormal investigation groups, and many universities have ghost hunt clubs or actual researchers. In the meanwhile, keep that vibe high and that positivity flowing!

Have YOU experienced a haunting? Tell us about it on our Facebook page. We’d love to hear it, and maybe we’ll include your story in upcoming articles!

How Powerful Are Spirits? 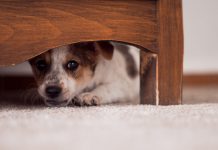 The Science of Déjà vu

Can Pets Change Your Life?